Wisconsin Point is a well-known migratory bird concentration area.  Its location at the head of Lake Superior makes it a natural bottleneck, funneling birds migrating along the west side of the lake.  Shorebirds, waterfowl, and landbirds all use the site heavily.  Hundreds to thousands of shorebirds of 26 species have been recorded here.  Waterfowl, loons and grebes are found in the open waters, while the brushy and forested portions of the point can hold very high numbers of landbirds—several thousand individuals have been recorded in single-day counts.  Large numbers of gulls and terns also are found here, including Caspian, common, and black terns and Bonaparte’s gulls.  The site also reliably produces Wisconsin rarities such as jaegers, black-legged kittiwake, Arctic tern, fork-tailed flycatcher, and Harris’s sparrow. 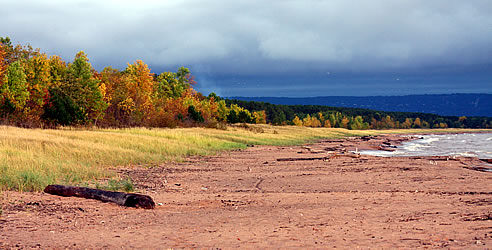