This IBA is an area of extensive conifer wetlands and upland deciduous and mixed forests, mainly on Vilas County Forest lands.  Flat basins host extensive muskegs of sphagnum, leatherleaf, sedges, and scattered small black spruce, tamarack, and jack pine, as well as a nearly continuous corridor of alder thicket along the Wisconsin River, which drains the center of the site.  The barely rolling uplands have sandy soils and forests of white, red, and jack pine, aspen, and other hardwoods, with many “islands” of mature trees. 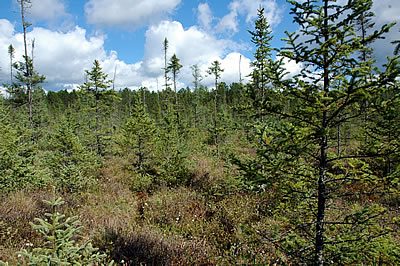