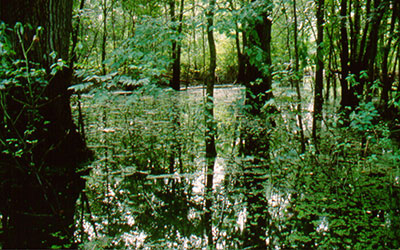 The Mississippi River is one of the great continental flyways along which birds migrate in spring and fall. Hundreds of thousands of waterfowl, songbirds, and raptors use the refuges as stopovers and migratory corridors, including half of the world’s canvasbacks and twenty percent of the world’s tundra swans. The forests, wetlands, and grasslands provide critical breeding habitat for many species, including bitterns, herons, bald eagle, red-shouldered hawk, yellow-billed cuckoo, Acadian flycatcher, prothonotary warbler, cerulean warbler, Louisiana waterthrush, lark sparrow, and eastern meadowlark.