The area encompasses most of the geological feature called the Gogebic Range. The rugged topography was formed millions of years ago and has since weathered and eroded to its present configuration. The underlying rock is very resistant, with four glacial events failing to pulverize it. Depressions dug by the glaciers are now scattered lakes and conifer bogs. The bedrock-influenced landscape is vegetated mostly with forests of aspen, maple, hemlock and basswood. Small patches of white cedar, white pine, and yellow birch occur in the uplands.

This site is considered a core habitat area for black-throated blue warbler, with up to 16,000 acres of suitable habitat available. A significant portion of the state’s population of this species breeds at this site. Other species breeding here include black-billed cuckoo, least flycatcher, wood thrush, golden-winged warbler, Nashville warbler, Blackburnian warbler, black-throated green warbler, Canada warbler, and rose-breasted grosbeak. 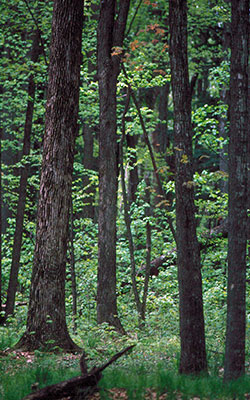