This area encompasses most of the Penokee-Gogebic Iron Range, the remains of ancient mountains. The topography is very steep and rugged, broken by numerous streams and two rivers, the Potato and the Montreal. Scattered lakes and bogs have formed in depressions dug by glacial action. Forests of aspen, maple, and basswood cover much of the range, with scattered patches of white cedar, white pine, yellow birch, and hemlock. To the south, Alder Creek flows parallel to the range and harbors alder thickets and swamp conifers.

This site is considered a black-throated blue warbler core habitat, with up to 12,000 acres of suitable habitat available. An estimated 1% of the state’s population breeds here. Other breeders include veery, wood thrush, Canada warbler, golden-winged warbler along Alder Creek, and Nashville warbler and Lincoln’s sparrow in the bog relicts. 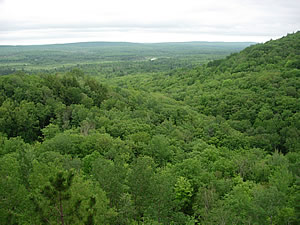