Extensive, undeveloped shorelines and a variety of habitats characteristic of the Lake Michigan coastal zone make this an ecologically rich and important site.  Habitats include open waters of Lake Michigan, sand and cobblestone beach, dunes, coastal wetlands composed of sedges, cattail, and bur-reed, and swamp conifer, mesic, and boreal forests.

Many priority wetland birds breed here including osprey, American bittern, Virginia rail, sedge wren, and the rare yellow rail.  Forest breeders include at least 13 species of warblers and other passerines, some, like golden-crowned kinglet and Cape May warbler, at or near the southern limit of their ranges in the state.  The terrestrial habitats at this site also provide important stopover habitat for migrating birds, and large flocks of diving ducks utilize the open waters of Lake Michigan in the winter. 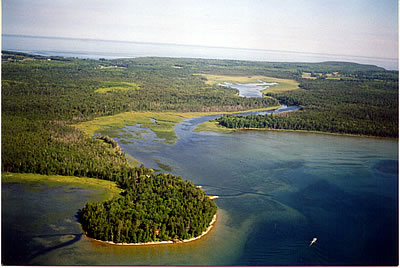