This IBA is located in the midst of one of the most extensive open landscape in Wisconsin’s Driftless Area, and features many streams, hills, ridges, and valleys with the Military Ridge along the northern boundary of the site.  Once covered by prairie and oak savanna, this area is now largely agricultural, consisting of cropland, pasture, and idle grassland (mostly CRP fields).  Smaller areas of woodland, savanna, shrub, and riparian habitats also are present.  The area contains a significant concentration of prairie remnants on slopes and areas of thin soil that were never plowed.  Most of the site is in private ownership, save for the York Prairie State Natural Area and several county parks.  The Nature Conservancy owns two preserves in the area. 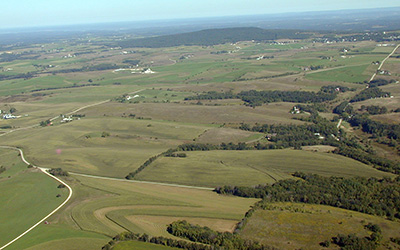