This site encompasses the final approximately 100 miles of the Wolf River below the Shawano dam as it flows south to Lake Poygan.  Numerous state properties are located within this IBA, including state wildlife areas, state natural areas, and fishery areas.  It is a vast area of open and forested wetlands, sometimes occurring in extensive tracts, both along the Wolf and its major tributaries (the Embarrass, Shioc, Little Wolf, Waupaca, and Rat rivers).  The floodplain forests here are the largest and most intact in all of eastern Wisconsin.  Also found here are emergent and submergent marsh, sedge meadow, shrub swamp, hardwood swamp, aspen, and some wetland communities more characteristic of northern Wisconsin such as tamarack swamps and open bogs.  There also are smaller areas of restored prairie and surrogate grasslands and patches of upland forests composed of oaks, maples, basswood, beech, and sometimes hemlock or white pine. 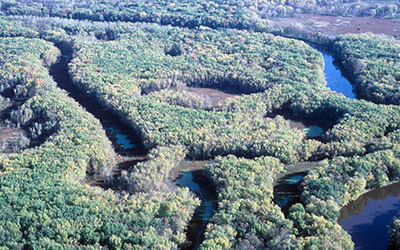