On the Chequamegon-Nicolet National Forest, this site covers the pine-dominated forests from the edge of the great Northwest Barrens across the moraine to more mesic lands in the eastern portion near the Rainbow Lake Wilderness Area. This high, relatively rugged moraine is found throughout the site, with numerous kettles holding various amounts of water. Extensive tracts of old conifer forest are a characteristic feature of this site, along with deep kettle wetlands and dry pine-oak forest that tends toward barrens in the western part of the area. Some of the uplands are in a similar old growth condition with patches of old red pine and white pine mixed with mature hardwoods, including the western part of the Rainbow Lake Wilderness Area. In places, the uplands have been managed for early succession forest trees mostly aspen, plantation red pine, and white birch. Smaller patches of open wet meadow, barrens, and upland openings also are present. 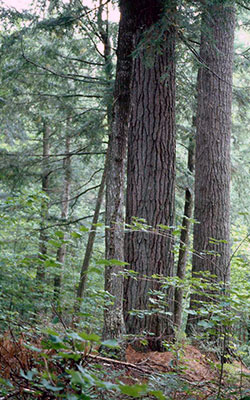