Famous for their varied topography and scenic beauty, the Baraboo Hills are the remains of a famous Precambrian rock formation called Baraboo Quartzite, one of the most ancient rock outcroppings in North America. This area contains the largest block of southern forest in Wisconsin and one of the largest in the Midwest. The southern slopes are forested with oaks and hickory; north-facing slopes are mostly maple, basswood, and oak. Scattered ravines and steep valleys harbor northern species such as white pine, hemlock, and yellow birch. Other habitats present include oak savanna, native prairie, cool season grasses, and cliffs and talus slopes. 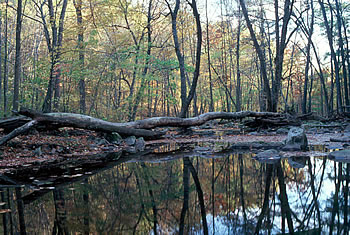 The Baraboo Hills support some 135 species of breeding birds, including important populations of several high-priority species such as hooded warbler and worm-eating warbler. The site is considered a cerulean warbler core habitat, with up to 30,000 acres of suitable habitat available for this species. The area is a concentration area for migratory landbirds in both spring and fall, supporting an estimated 10,000 migrants per season. Greater than 25% of the state’s turkey vultures congregate here in the fall. The Baraboo Hills contain more rare species and diverse concentrations than any other similar sized forested area in southern Wisconsin and are considered critical for bird conservation.