The 7,350-acre Badger Army Ammunition Plant spreads southward from the flank of the Baraboo Hills, across the broad terminal moraine of the last ice sheet and its outwash plain—the former Sauk Prairie.  Constructed in 1942, the plant employed thousands of people to produce propellant for World War II, and the Korean and Vietnam wars.  In 1998 the U.S. Army announced that the plant would be decommissioned.  This began the long processes of deconstruction, decontamination, and planning for its eventual transition to more peaceful public use.  As of 2012, the tract is divided primarily between the Dairy Forage Research Center (a collaboration between the U.S. Department of Agriculture and the University of Wisconsin) and the Wisconsin DNR, which is in the process of planning a 3,000+ acre Sauk Prairie Recreation Area (SPRA).  Some acreage may go to the Ho-Chunk Nation.

Originally a mosaic of oak woodland, savanna and extensive prairie, this tract was converted to farmland by the late 1800s.  During the years of Army ownership, extensive grassland was maintained among widely spaced buildings, with the help of grazing and mowing.  Since this management ceased around 2002, exotic shrubs have spread over many former grasslands and savanna pastures, but control efforts are ramping up as lands are being transferred.  Among the goals of the DNR’s incipient SPRA are to protect its broad connection with the extensive forest of the Baraboo Hills, manage for grassland-savanna wildlife, honor the site’s historical and cultural significance, and provide for compatible recreation.

This IBA provides some of southern Wisconsin’s most extensive and continuous habitat for our troubled populations of grassland, shrubland and savanna birds—about 5,000 acres.  Aside from a small prairie remnant and some restored plots, the grassland consists primarily of exotic pasture grasses and forbs.  These provide excellent surrogate habitat for species that have declined due to the loss of the original prairie landscape, and then the replacement of “bird-friendly” grass-based agriculture by row-crops, alfalfa fields, exurban development and forest succession that came to dominate the surrounding rural landscape since the plant was built.

A thorough survey of the entire Plant was conducted in 1998 when infrastructure and grazing prevailed, and again in 2012 after deconstruction, when the lack of grazing had converted some fields to thick grass but allowed invasion by exotic and native shrubs and trees.  Hundreds of Bobolinks, Dickcissels, Eastern Meadowlarks and Henslow's Sparrows breed in the large grassland tracts, while shrubby areas provide for Bell's Vireo and myriad Willow Flycatchers, Clay-colored Sparrows and Field Sparrows.  Although the cessation of grazing has reduced numbers of Upland Sandpipers, the removal of utility poles has reduced the once-impressive population of Red-headed Woodpeckers, and shrub encroachment has whittled away at both grassland and savanna habitats, great opportunities are opening for maintaining and improving this area of critical bird habitat. 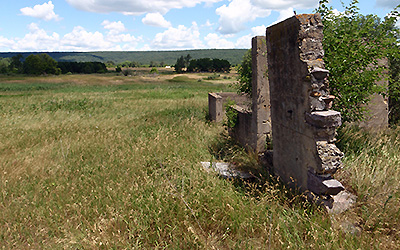